US Treasury yields continue to rise, why should China be the one to worry about?

As US Treasury yields catch up with China's, money is likely to flow out of the world's second-largest economy back to the US.

When yields cross, i.e. U.S. bonds have the same or more high yields as Chinese bonds, it theoretically reverses an investment strategy that has persisted for years. Many people pour money into Chinese treasury bonds in the hope that it will yield better returns than investment in US bonds. If this no longer holds true, the money is likely to flow back to the US.

It is not clear if the development is large and severe enough to have widespread impact. However, this is still a market sign that investors are watching. 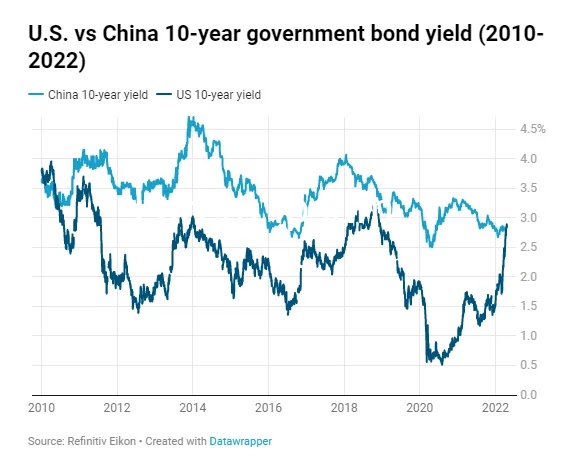 According to Refinitiv Eikon, the 10-year US Treasury yield is up to 2.857%, compared with 2.873% for China. Recently, US Treasury yields surpassed those of China for the first time since 2010. However, this is also due to a somewhat divergent monetary policy, according to analysts. 2 countries.

China and the US are also facing different inflationary dynamics, with producer prices rising in both countries. However, the increase in consumer prices in China was lower than in the US.

Investors are closely watching the impact of narrowing interest rates on the Chinese currency. One worry is that if the currency weakens too strongly, it could cause capital outflows.

"Currently, there is no indication that China or the US will shift their monetary policy focus," said Gao Xiang, a bond analyst at Nanhua Futures based in Hangzhou, China. . "Bond yields on both sides continue to show relative independence. In the process, the currency's exchange rate will act as an important buffer and indicator. important for the future".

Over the past few months, the currency has been trading near a three-year high against the dollar and has weakened slightly in recent weeks. The domestic yuan is trading at 6.37 yuan to 1 USD.

But for now, China's high trade surplus is more than offsetting the impact of narrowing yields on the currency, said Larry Hu, chief China economist at Macquarie.

China's currency will face more downward pressure from China's shrinking trade surplus. For him, the parity between the 10-year US and Chinese bond yields is not a big deal because the gap has gradually narrowed over the past 1 year.

A country has a trade surplus if its exports exceed its imports. China reported a trade surplus of $47.38 billion in March, a sharp drop of $115.95 billion from the January-February period.